On Monday October 21, the Major of Eindhoven and Chairman of the Brainport Foundation, John Jorritsma, received a group of 10 Ambassadors and Trade and Innovation Representatives from foreign embassies in The Netherlands for a Dutch Design Week Economics Relations Event. The aim of this gathering was to organize meetings and interactions with local entrepreneurs to create an emotional engagement between the embassies of the United States, Germany, Italy, Ireland, Spain, France, China and the United Kingdom, and the innovative technologies of Brainport Eindhoven. The meeting took place at the mythic PSV Stadion and was organized by Brainport Development, the economic development company of the Brainport Eindhoven region.

STENTiT attended the event and had the privilege to discuss future business opportunities with the foreign Ambassadors and Trade and Innovation Representatives. Special thanks to Fancy van de Vorst for making this possible. 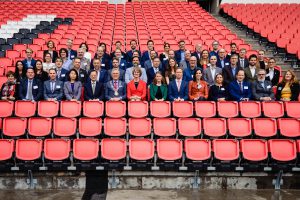